Starting from now, I will be posting about any changes that are being made for each build. I’m aiming to do roughly one build post per month, in order to summarize everything that has been done.

Things are slowly being prepared to bring the game to Steam in the near future. This means bug fixing and overall improving what is currently in place, rather than developing anything major at this point. However there are still new abilities and enemies being added. Integrating Steam API and managing build processes has also been on the agenda, as preparations are made.

– All trees, cotten bush, berry bush and rock designs replaced.  This is quite a style change for these objects, but it’s improved the quality and helped keep more flexibility with how things will look. 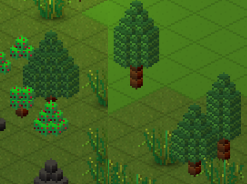 – More grass has been added in most areas

– You can now walk through grass, but still destroy it

– A new ‘Low GFX’ option has been developed. This gives an option for a different lighting method that runs without using shaders. For systems with low graphics capability, this may noticeably improve
frame rate.